I’m passionate about a lot of things and home decor is one of them. Just kidding, I just want my house to be pretty. So I thought I would take you on a quick Christmas tour of the house…and eventually I’ll do an actual tour of each room…..eventually….I don’t know when….so don’t hold your breath.

It’s no secret that I love Christmastime. My spirit animal is a reindeer. So when I decorate for Christmas I like to go all out, but also all cheap because I don’t want to break the bank…and because Casey puts a limit on my credit card usage for the months of November and December. Just kidding, he doesn’t…but maybe should. I usually keep the Christmas decorations to the main parts of the house so that we can all enjoy them, but eventually I’d like to get to this point:

Compromise is key in marriage.

So here’s a quick tour of our house during Christmas!
Living Room:

Our Christmas tree is a neutral color and then I usually wrap presents in golds, tans, and reds. I got the little truck under the tree at Home Goods and kind of love it. The wreaths on the windows are flocked and they were $10 each from Walmart. Score! They are surprisingly full and fluffy, which I love. The presents under the tree have no food in them because we have learned our lesson with wrapping food beforehand and having a dog with impeccable smell. 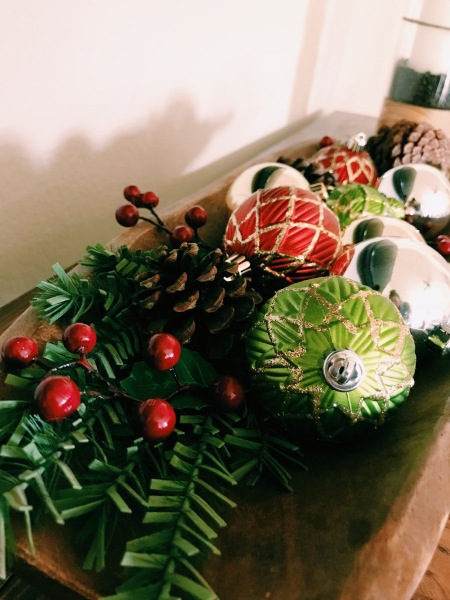 That lantern is around the house all year long, but I dress it up with holly at Christmas and viola! I bought a pack of holly at Target last year for $6 and basically just went crazy with it. Oops. 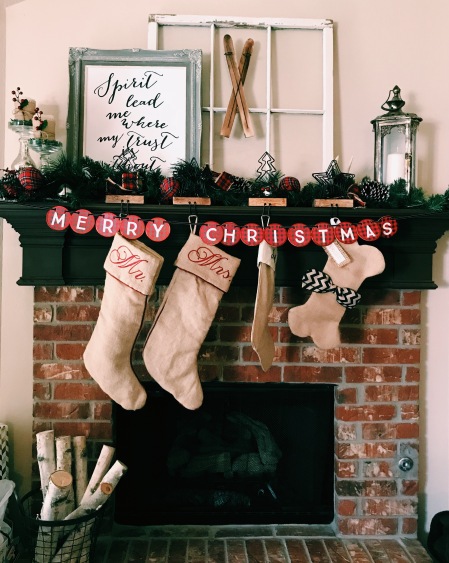 Our mantle doesn’t change much. I just add garland (from Home Goods), our stockings, and switch out the wreath on the window for skis that I bought in the Target dollar spot (last year, I think?). Also, went crazy with the holly again.
Playroom and Hallway:

This truck is in Joel’s playroom all year long, but I put a Christmasy napkin underneath it and a Target dollar spot Christmas tree in it’s trunk and called it a day. In fact, I think the tree still has the price tag on it because I was too lazy to take it off. #reallife 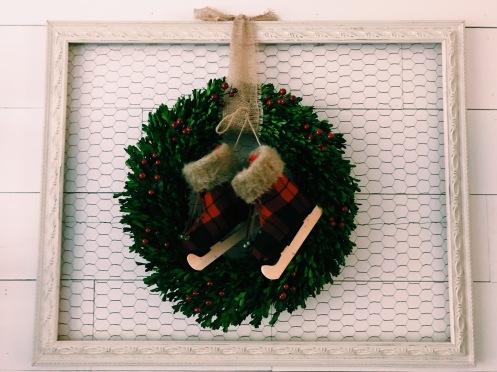 Again the wreath is up all year, but I stuck some holly in there to make it a Christmas wreath and added the skis (bought at Marshalls this year) so it looks like I’m really good at ice skating and there you go!

This tiny Christmas tree was in my classroom last year and it’s now holding all my childhood and Joel’s babyhood ornaments. We want to get him an ornament every year that describes him/his year…so this year we got him that puppy ornament for obvious reasons. The Willow Tree nativity is the focal point of this area and is from my wonderful aunt. She gave me a piece of the nativity every year until it was complete. I love it…and her. Shoutout to Tato.
Outside:

Ignore the whiskey barrel stain on the concrete and focus on the pretty poinsettias. Sidenote: if anyone knows how often you’re supposed to water poinsettias, hit me up, because I was supposed to google that and keep forgetting.

That’s basically it. I have other small decorations here and there (including the kitchen), but it didn’t seem significant enough to document. Best advice: just buy yourself a package of holly and throw that crap everywhere. Just kidding. Kind of.